St. Luke the Evangelist Parish in Lakewood, Ohio has direct connections with the people of El Salvador and its 20th century martyrs. Jean Donovan, a St. Luke parishioner, was one of the four churchwomen brutally attacked and murdered by government forces on December 2, 1980, the same year that Archbishop, now Saint Oscar Romero was martyred while saying Mass.

Cardinal Sean O’Malley, in his Centennial homily at St. Luke on May 22, 2022, outlined connections between our parish and El Salvador. You can watch his homily here. Cardinal O’Malley knew Archbishop Romero as a fast friend and met the four churchwomen through his work with the Salvadoran community in his parish in Washington DC. The Cardinal emphasized:

Here at St. Luke, we have great devotion to the Twentieth Century martyrs of El Salvador. I see the shrine we have installed here…their lives in service of the Gospel are an inspiration to us all. And we pray for their intercession for this faith family that we will carry out that mandate to ‘Go and make disciples. 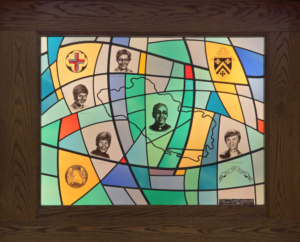 On February 3, 1977, Oscar Romero was installed as Archbishop of San Salvador at a time of significantly deteriorating civil strife. His witness of the Gospel in such trying times was heroic and led to his martyrdom while saying mass.

Saint Oscar Romero’s image is ubiquitous in El Salvador. His words and life offer people the world over inspiration even today.

For an introduction to a long list of insightful readings, visit FranciscanMedia.org. 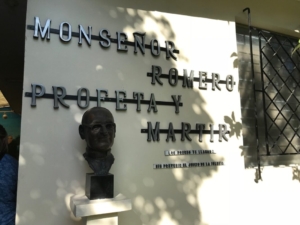 Home of St. Oscar Romero, now a museum and shrine, located across the street from Divina Provedentia in San Salvador, where St. Romero was martyred. 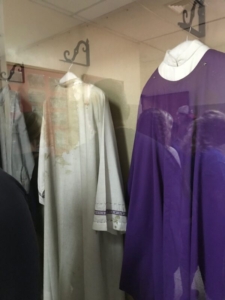 Martyrdom of four US Churchwomen, December 2, 1980

On December 2, 1980, Sr. Dorothy Kazel, Sr. Ita Ford, Sr. Maura Clarke and Jean Donovan were kidnapped by government-backed forces, taken to the country, brutally assaulted and murdered. Jean Donovan had been a parishioner of St. Luke. Their stories have been well-told in many places and are worth close consideration. Learn more about the martyrdoms at OSU.edu and Wikipedia. 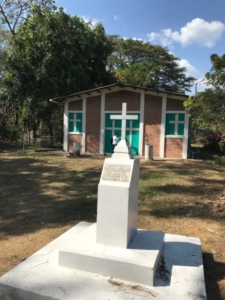 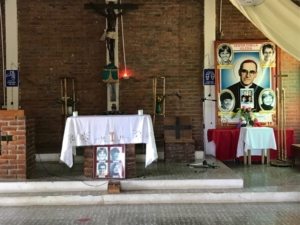 Text at the “Martyrs of El Salvador” Shrine in St. Luke Church

On March 24, 1980 in the Chapel of the Divina Providencia Cancer Hospital, Oscar Romero, Archbishop of San Salvador, the capital of the Central American nation El Salvador, was killed during his homily by a gunman who fired one well-placed bullet through his heart. Archbishop Romero’s martyrdom came in the midst of terrible civil strife that would become even worse during the 1980’s until it was finally resolved by a 1992 peace accord.  Archbishop Romero was martyred even though he had not taken sides in the political conflict, but had urged the warring parties to negotiate instead of using hate and violence, to seek reconciliation and compromise in the spirit of Christ. Like Christ, he was put to death for his teaching. Archbishop Romero spoke:

“We cannot do everything, and there is a sense of liberation in realizing that. This enables us to do something, and to do it very well. It may be incomplete, but it is a beginning, a step along the way, an opportunity for the Lord’s grace to enter and do the rest. We may never see the end results, but that is the difference between the master builder and the worker.”

Dorothy Kazel joined Cleveland’s Ursuline Community in 1960. She joined the Cleveland Mission Team in El Salvador in 1974, and was engaged in pastoral, medical and relief work among the poor in the country’s refugee camps. After six years of service there, she was to return to the United States, but in 1980, Archbishop Romero’s death so affected her that she decided to stay on. Her work among the poor angered the El Salvadoran government which was involved in a violent military put-down of civil strife. She was brutally raped and murdered on a return trip from the airport of December 2, 1980. Sister Dorothy wrote a friend:

“We talked quite a bit today about what happens IF something begins. And most of us feel we would want to stay here. Now this depends on WHAT happens-if there is a way we can help run a refugee center or something. We wouldn’t want to just run out on the people. Anyway, my beloved friend, just know how I feel and ‘treasure it in your heart’. If a day comes when others will have to understand, please explain it for me.”

Jean Donovan came to Cleveland to receive her master’s degree at Case Western Reserve University. She lived here as a parishioner of St. Luke while working at a prestigious accounting firm and volunteering for the Youth Ministry Office of the diocese. Seeking greater involvement, her quest for service led her to join the Cleveland Mission Team in El Salvador in 1978, where she met and worked with Sr. Dorothy. On December 2, 1980, the two volunteered to pick up two of their fellow missionaries from the airport. Sometime that evening, she was shot in the face, tortured and murdered for her involvement with the poor in El Salvador.

“I love life and I love living. While I feel compassion and cry for the people here, I am not up for suicide. Several times, I decided to leave. I almost could, except for the children – the poor bruised victims of this adult lunacy. Who would care for them? Whose heart could be so staunch as to favor the reasonable thing in a sea of their tears and loneliness? Not mine, dear friend, not mine.”

Maryknoll missionary Sister Ita Ford, originally from New York City, arrived in El Salvador only after spending seven years working among the poor of Chile. What she experienced there challenged her to respond to Archbishop Romero’s call for help in El Salvador, and she arrived there shortly after his death in March of 1980. She returned from her order’s Regional Assembly in Nicaragua on December 2 of that year, and was picked up at the airport by Sr. Dorothy Kazel and Jean Donovan to return to their work. They were never to arrive. She was brutally beaten, dying a violent and senseless death at the hands of the El Salvadoran National Guard.

“Am I willing to suffer with the people here, the suffering of the powerless, the feeling impotent? Can I say to my neighbors- I have no solutions to this situation; I don’t know the answers, but I will walk with you, search with you, be with you. Can I let myself be evangelized by this opportunity? Can I look at and accept my own poorness as I learn from the poor ones?”

Sister Maura Clarke, also a member of the Maryknoll Mission from New York, spent long years as a missionary in Nicaragua previous to her assignment in El Salvador. Her St. Francis-like generosity led her to give away everything she had to anyone who needed it. Given the opportunity to return to the United States, she opted to stay and work among the poor and oppressed victims of violence. On December 2, she herself would become one of the victims, as she was stopped with the other three women a short distance from the airport. All were raped and murdered, ultimately giving their lives in the name of the poor they served.

“There are so many deaths everywhere that it is incredible. It is an atmosphere of death. The work is really what Archbishop Romero calls ‘acompanamiento’-accompanying the people as well as searching for ways to help. This seems what the Lord is asking of me, I think, at this moment. We are on the road continually, bringing women and children to refugee centers. Keep us in your hearts and prayers, especially the poor forsaken people.”

Jesuit Martyrs and end of the civil war 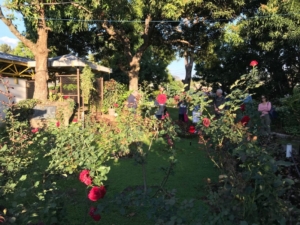 Memorial Rose Garden at CUA, San Salvador, where Jesuit martyrs and their housekeeper and her daughter were murdered in 1989.
Photo Credit: Lou McMahon

El Salvador today has emerged from the civil strife of the past century, but its past continues to present challenges even amid relatively improved economic conditions. The diaspora caused by decades of emigration, much of it to and from the U.S., fostered a significant gang issue that was imported back into El Salvador from US-formed gangs.

The people of El Salvador often demonstrate a resilient faith and enduring gratitude to God for every good thing that they have, no matter how modest. Salvadorans remain in need of material assistance, but they are ready to heal spiritual poverty to North Americans who are open to connecting with them. 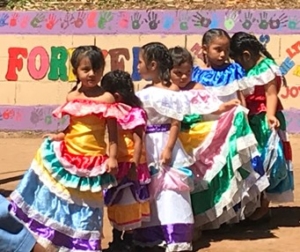 St. Oscar Romero and the Four Churchwomen, Pray for Us.